Shula, my eldest granddaughter has returned from Uganda.
She had an amazing experience volunteering at the schools. She also visited the local regions taking part in sessions which encouraged mothers to get themselves and their children tested for HIV. She is already looking forward to going again next year. 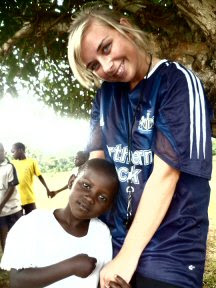 Mid-month, we flew to the Isle of Man at the invitation of Alan and Fran, the friends we made on the Baltic Cruise in June. They had sent us a DVD to watch so that we could decide together via e-mails, the sites we would like to visit. As it turned out, they showed us every nook and cranny of the island, even taking us around the TT circuit.
We flew over with Manx2 from Valley to Castletown in a Dornier 228. This is a very small plane with only one passenger on each side and VERY noisey. As the plane sat on the runway, I kept thinking of my Dad. He had been in charge of building this runway during the war in 1942. Here I was, not only sitting in one of the German planes that probably flew over Valley then, but being piloted by two Germans. Thankfully, times move on. Our journey was over in 20 minutes! Sad to say, I don’t think they’ll be going again until next summer. We had fine weather on both flights and throughout our stay there. This is a view taken over Rhosneigr. 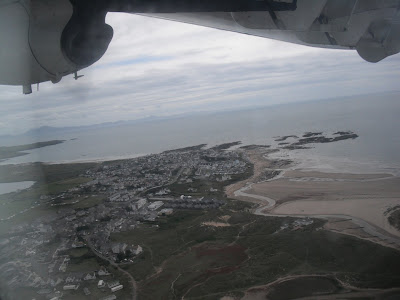 Our first call was to The Manx Museum in Douglas, where we were staying. To start us off, we entered a small viewing cinema showing us an excellent informative film about the island’s history.
Despite it not being very big The Manx Museum is bursting with national treasures including hoards of Viking silver and gold. They have several extremely well done displays and naturally, a display of motorcycle memorabilia. Most galleries have interactive interpretive screens. It was nice to come across a group of children engrossed in making rubbings of Celtic stone engravings. 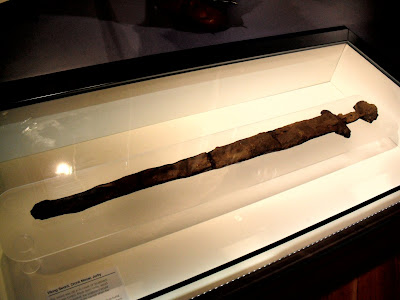 We ended up spending most of the morning studying the periods that interested us most, resulting in us having to do a quick tour of the rest before having lunch at their very nice modern café. The visit had given us a fascinating insight into the island’s history before commencing our 5 day tour.

The next day, we visited Peel. Here, the castle dominates the town. However, as you might have guessed by now, it was their museum we wanted to visit. The House of Manannan was built in 1997. It is partly new and partly the old Peel Railway Station. Manannan is the Island’s mythological sea god and protector and he could shroud the island with a cloak of mist to protect it from its enemies. Maybe this is one reason why the Romans never came across it!
I really felt this is such a brilliant museum. It covers the history of the island, from ancient times to the present day. It highlights the Celtic links, the early Viking settlers, the coming of Christianity, and the various wars fought there between rival English, Scottish and Viking warlords. It emphasis The Isle of Man's links to the sea with exhibits that tell you about smuggling, exploration, trade, fishing, Trafalgar and the Mutiny on the Bounty.

The centrepiece of the museum is "Odin's Raven", a replica Viking longship built in Norway in 1979. It was then sailed to the Isle of Man to arrive in Peel harbour on Tynwald Day in 1979. 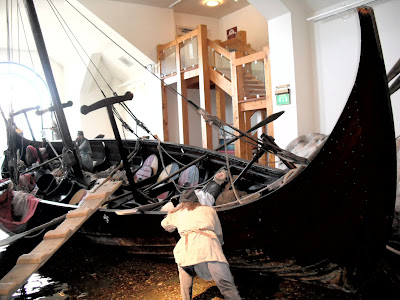 The House of Manannan is wheelchair accessible throughout. The story unfolds as you enter first the Iron Age round house. Set amongst the various room artefacts, are lifelike authentically dressed mannequins. Here, as in the other rooms you will enter, there are short video films with soundtracks to tell you the background stories. There are also interactive screens, and tape recordings you can listen to. As you enter each room, you enter a new phase of history. My only problem was, that my camera was useless at taking pictures in the lighting conditions there as you can see from this one I tried to take of a Viking. 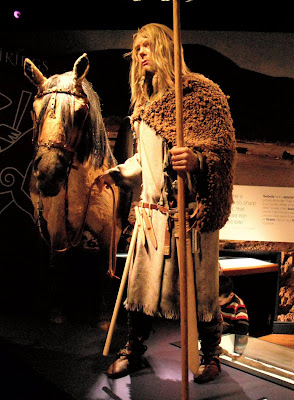 We visited two Celtic Crosses' collections. Our first visit was to Maughold where one of the stones had an unusual loop with a hole at its top. I have my finger in the hole in the picture. 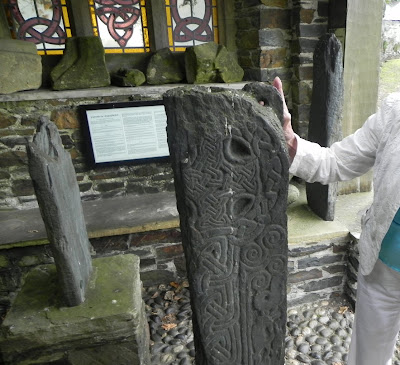 The second visit was to the church of St. Peter in Onchan. The collection is inside the church but the church was locked. However, the sexton was working outside and when he heard that we were over from Anglesey, he insisted on showing us enthusiastically around its inside. As we left, I remarked about a large church bell on the ground outside. It seems that the members had decided to get a new steel bell instead of the old one. The day arrived for the new bell to be rung and a large crowd had gathered for the occasion. They couldn’t believe their ears though when they heard a ting, ting rather than the usual bong, bong! The new was duly taken down and the old re-installed. If you know of anyone in need of a very large bell, its there for the taking but it would need to be transported by sea! In the picture,you can see a few of their collection of Celtic crosses. 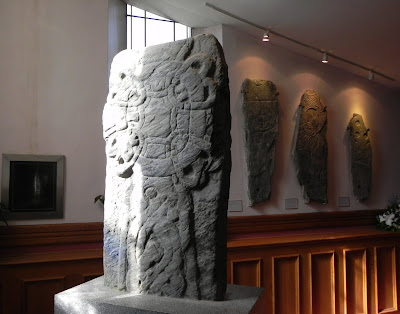 We also visited a burial site across the road to the Laxey wheel, called King Orry’s grave.This is a Neolithic chambered long barrow over 4,000 years old. It contains three chambers once filled with burials. When excavated in 1953 only one burial and bowl had survived. The name King Orry's Grave is probably early 19th century and supposedly coined as a joke! King Orry in Manx history usually refers to a Scandinavian king who claimed to be present when the west end of the barrow was opened in the 1830. Previous to this, the monument was nameless. 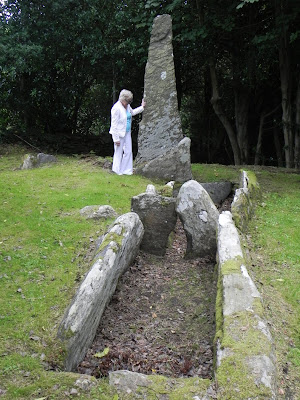 Incase you should think we spent all our days going around museums and gravestones, we also managed to see the Point of Ayre lighthouses, the Calf of Man, Creagnesh Folk Village, the Laxey wheel, the Castle and House of Keys at Castletown with lovely lunches at Niaryl point and Milntown mansion house. This was all due to the fact that we were lucky enough to be chauffeured around by Fran and Alan in their very spacious car.
This is me on the balcony of our room overlooking Douglas Bay, before we went for an evening meal with them at Norman’s Bar ( named after Norman Wisdom) before going on to the Gaiety Theatre nextdoor. Here again, we were enthralled to see such a beautiful Victorian theatre. 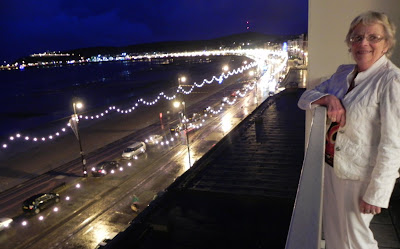 Having seen the DVD my cousin Ken has recorded based on his lecture on the bonesetters of Anglesey, I decided it would be a good idea for me to do the same on Llyn Cerrig Bach. I have therefore being involved in composing text and filming it on site at various locations that appear in my lecture. This turned out to be very different from speaking in front of an audience. I also had to remember to wear the same clothes each time! Having completed the site visits, the next recordings will be done whilst sitting in my study. I have a major job therefore doing some paper clearing on my worktops before this takes place. 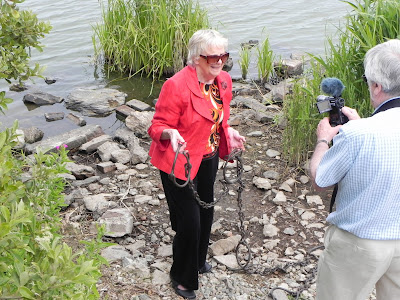 September !st tomorrow, so managed to get my August entry written in time!