Following my concept of having a book printed specifically on the find my father instigated at Llyn Cerrig Bach, I had a meeting with Philip Steele, the editor of this book, who is working in conjunction with the publisher, Robert Williams of Magna Books to bring this book to fruition. Hopefully, it will be launched next July in order to coincide with a collection of Llyn Cerrig Bach that is coming back to Anglesey from Cardiff. These will be displayed at Oriel Ynys Môn from July onwards for three months.

Alan took a picture of Phil and I planning which images that needed to be included in the book from my Powerpoint Images and also the text needed from my lecture notes. 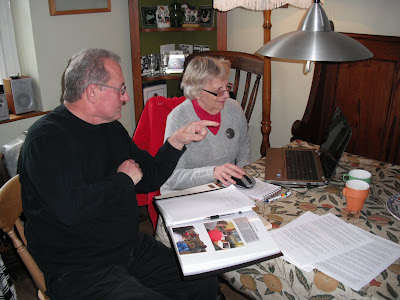 This meeting was followed later by an e-mail from Phil, enquiring as to where in my research I’d found out that TACAN rock, thus christened this by the RAF, was originally called Craig Carnau’r Ebolion. He needed confirmation of this fact before putting it into print in the book. He also queried my translation of Llyn Cerrig Bach, as the Lake Belonging to Cerrig Bach farm. Only this last August I saw again it literally translated and referred to in English as “The Lake of Little Stones “.
.
By going back to my original research source, Ida Owen, Carnau Farm, I was able to confirm that I had translated the title of the lake correctly. Mrs Owen agreed with me, that the translation of Llyn Cerrig Bach should be, the Lake of Cerrig Bach (i.e. belonging to the farm of Cerrig Bach). She stated that all the lakes around that area carry the title of the farm on whose land they are sited on. They include Llyn Traffwll, Llyn Dinam and Llyn Penrhyn, all carrying the names of their farms.


Regarding my title of Rock of ponies’ hooves, Mrs. Owen assured me that the full title on the deeds of her farm property appears as Carnau’r Ebolion and agreed that it refers to hooves of ponies. Hence my remarks about the coincidence that small horse’ bits had been found in Llyn Cerrig Bach. TACAN rock was on their land originally before the airfield took it over. She repeated to me that It was always referred before then as Craig Carnau’r Ebolion. I wonder if the chariots therefore were built to fit the size of these small indigenous horses.

As members of the Anglesey Antiquarian Society, the county’s history society, we have been celebrating its centenary during November. First, an exhibition was launched at Oriel Ynys Môn, with some artefacts being brought back on loan from the National Museum at Cardiff and from the British Museum. Various cabinets can be seen showing artefacts that have been saved by our society over its many years.

A centenary weekend of events then took place. On the Saturday, Alan and I attended a full day of lectures at Plas Newydd, Lord and Lady Anglesey’s residence on the banks of the Menai Straits. It was a beautiful sunny day and the Snowdonia Range looked magnificent across the waters. 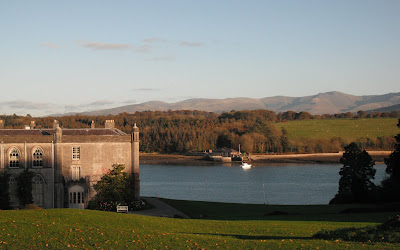 I particularly enjoyed the lecture given by the renowned Welsh artist, Peter Lord about Artisan painting 1732 – 1860. Peter himself has bought quite a number of these paintings. He showed a picture of a self portrait by Edward Owen of Penrhos, Holyhead. This Peter re-discovered in a private collection in Massachusetts, America. He will be exhibiting this long lost painting amongst others at Plas Glyn y Weddw, Llandwrog.
You can read the full fascinating story about Edward Owenof Penrhos if you Google his name. 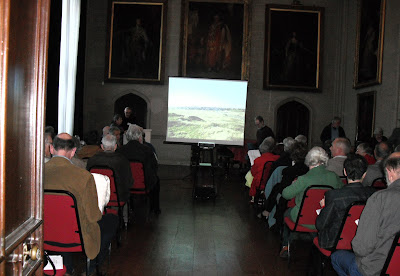 Our second venue for our society’s centenary celebration, was a lunch at the newly re-furbished mansion house of Plas Coch, situated not far along the bank of the Menai Straits from Plas Newydd. The date above the front door – 1569, shows that it was built in the time of Elizabeth 1, 450 years ago. It was built by the Welsh gentry’s family Hughes, descendants of whom live at Brynddu, Llanfechell. They are direct descendants of Llywarch ap Bran, a key official to Owain Gwynedd, the King of North Wales. The present owner has now built luxury holiday lodges in the grounds, from which they have a magnificent view of the Snowdonia Range across the Menai Straits. After lunch, we were taken to an upstairs lounge where we were given an excellent account of the stages and problems that were encountered and overcome during the refurbishment period. 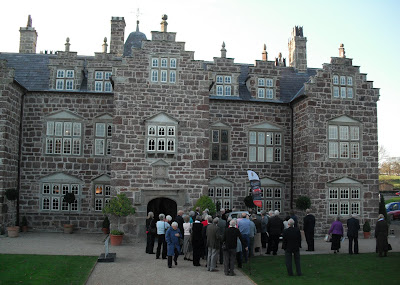 A new Archives building was opened recently in Llangefni. The Talwrn Archaeology group, which we attend their lectures, had a special viewing evening of its new research and storage areas. Amanda Sweet and Pat West gave us an interesting guide as how to make the best use of these new facilities.
As if completing my blog in time each month is not a sufficient challenge for me, I have now volunteered to keep a HAND WRITTEN diary throughout the coming year. Different age groups will be taking part in this project.These diaries will then be placed in our Archives at llangefni. It is hoped that these will give future generations a snapshot of life on Anglesey during 2012. 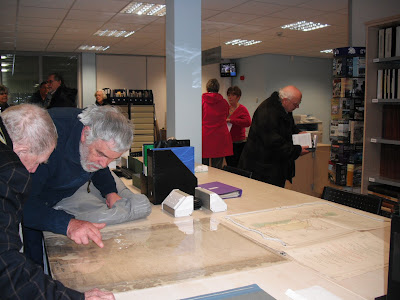 Our next Talwrn Group gathering was at the Christmas Dinner. This was held in the restaurant in the new extension built at the back of Plas Coch, which also has a huge Spa. We had a fantastic evening dinner and enjoyed sharing the company of our dear friends Chas and Helen Parry-Jones. Sadly, Plas Coch is not open to the general public, so we were very lucky to have an insight to both the old and new parts during the course of one month! 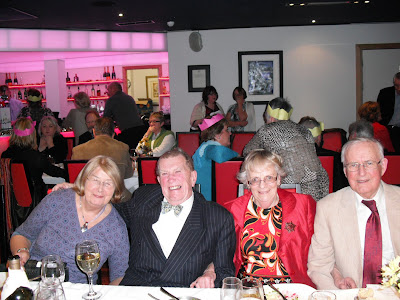 Since last September, Alan and I have been attending a course of lectures given through the medium of Welsh by Rhys Mwyn at Llanfairpwll. These have been on the Archaelogy of Anglesey and North Wales. Evidence as to how good these lectures were, lies in the fact that we started in September with 25 members and the 25 members kept on attending to the end of the term. We are all looking forward to rejoining the class again in January. I am hoping to start a similar Monday evening class with Rhys at Llanfaelog Village Hall in the New Year. The format for this class will be bi-lingual and based mainly on the History and Archaeology of Anglesey. I also hope to set up a Beginners’ Evening Class in learning Welsh at the same venue.
follow Rhys’ blog – rhysmwyn.blogspot.com 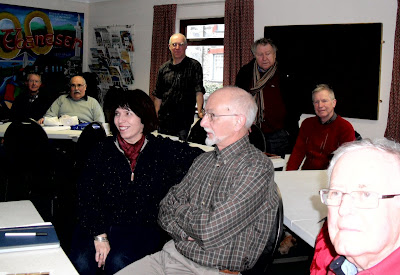 News that saddened me recently, was hearing that the History and Archaeology displays at the National Museum will be moving from Cardiff to San Fagan. I fail to see how anybody from North Wales will be able to visit this display in a day, as one is able to do now; being the museum is sited conveniently in the centre of Cardiff. By the time you’ve travelled by train down to Cardiff and then caught a bus to San Fagan, you’ve very little time left for viewing anything. This means that anyone travelling from North Wales will have the extra expense of an paying for an overnight stay. As a result of my talks, so many of my associates, including school children, have been to view the Llyn Cerrig Bach display. I have written to implore the powers to be at the museum, to at least lay on a shuttle bus service at convenient times from the museum door to San Fagan. Probably, the whole of San Fagan Heritage site would benefit from such a service.
If you also wish to state your objection to this move, do write to -
Nigel Williams, National Museum Cardiff, Cathays Park, Cardiff CF10 3NP
or e-mail: nigel.williams@museumwales.ac.uk
Posted by Llyn Cerrig Bach at Tuesday, December 27, 2011